David P. Bridges, theologian, historian, novelist, cattleman and agrarian, began his authorship career during two and a half decades of serving as an ordained Presbyterian minister.

David’s Bachelor of Science degree was focused upon Agricultural Economics received from The University of Kentucky, College of Agriculture. He furthered his academic studies in theology and history at the Louisville Presbyterian Theological Seminary, where he earned a Master of Divinity degree, and The University of Chicago, Divinity School, two-years of post-graduate studies. He studied the craft of fiction for a year at both: Hollins University, Roanoke, Virginia, and John Hopkins University, Baltimore, Maryland. David taught the composition of Literary Historical Fiction as an Adjunct Professor of Creative Writing at the University of Richmond in Virginia.

David resides on his 261-acre farm, Woodmont of Virginia, in the Appalachian Mountain Range near Callaway, Virginia, an eligible bachelor, with his faithful bird dogs who are high-end pedigreed breeder English Setters: Angel, Bella, Rosey, Biggen, Shelby and newest offspring Setters: Wolfe, Sophia and Sissie, along with his Black Angus herd of cattle, also bred for Spring Calves in a cow-calf operation. 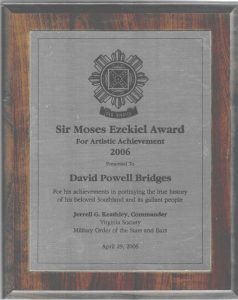 Presented to David P. Bridges for Artistic Achievement on April 29th, 2006 by Jerrell G. Keathley, Commander for the Virginia Society Military Order of the Stars and Bars, a lineage society founded in 1938 for men who are descended from military officers or political leaders in the Confederate States of America (CSA).

David delivers one-of-a-kind writing instruction to his students. Join us at Woodmont Writers Enclave to overcome distractions and blocks and stretch your writing to new bounds.

Another three novels in the works will be forthcoming: Eden's Clan, Robert Bridges Editor-in-Chief at Charles Scribner’s & Sons Magazine, 1880-1930s and Evan Shelby, Jr.: Settler, Soldier and Fur Trader. David resides on his farm, Woodmont of Virginia, in Callaway, Virginia, with his faithful birddogs: Angel, Bella, Rosey, Biggen and Shelby and his Black Angus herd of cattle.

What They Say About David Bridges

“David did indeed appear last night and though the group was small (12) they were very enthusiastic and interested. David was wonderful, very engaging, and sold several books. I wish more people would have been here to hear him, but those who were really enjoyed the evening. Thanks for your help.”

“David, I watched the 25 minute version of Broken Circle and found it fascinating. Am going to buy your book and try to promote in the store. Also found it very interesting that you are a presbyterian minister. Now I wished we could have talked some more. Thanks for coming and sharing the dvd. Breathed certainly is unusual and the doctor vs. soldier deserves more attention.